Pizza Oven Kit are not for the Faint of Heart 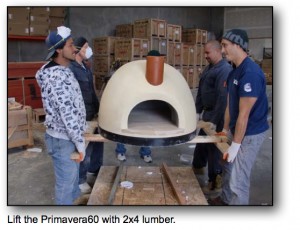 A team of strong guys using 2x4s can lift a preassembled oven, but for anything beyond the small vertical lift pictured in the manual, things get complicated. What if the guys are different heights? Even if they are well matched, as soon as they start tying to move as a unit it gets difficult. If anyone slips, needs to shift their grip, or if a board begins to split or crack… things can get scary.  Any change in the balance of the oven presents a real challenge for a team trying to carry it.

After positioning the oven, the second and sometimes bigger challenge in installing a preassembled pizza oven (like the Primavera 60 and 70) is getting it on the metal stand. The stand legs are predrilled with bolt holes about 32 inches from the ground. Anyone who has assembled a bed frame or something similar knows that not all of the bolt holes will line up perfectly when you have four metal legs with a bit of play and two bolt holes on each leg.

Until bolted, the metal limbs move and twist. Usually you tighten bolts just enough to stay in place as you move around from corner to corner, pushing and pulling to get all the holes lined up. Then you can tighten down everything. Honestly this is tough when installing a preassembled pizza oven that weighs over 500 pounds.

Usually the freight company delivers the oven crate to the driveway. Homeowners have to haul the oven to their backyard where they want to set it.

Forno Bravo recommends that homeowners rent a mechanical lift for heavy models. Renting a crane might sound extreme, but a crane can be the simplest solution. The crane manages not just the initial lift and move but holds the weight of the oven safely suspended over the metal frame. This allows for aligning and securing the bolts. Crane rentals usually come with licensed operators.

If the oven placement does not allow the homeowner to use a crane, renting a forklift is another option. The forklift works for sliding an oven onto a permanent masonry base (not a metal stand). This YouTube video shows a homeowner using a forklift to place a Napolino preassembled oven. We’re glad it worked for him, but there are some nail-biting moments in the video and we do not recommend his technique—or installing a preassembled pizza oven by yourself.

If you need to manually move your oven from the front to the back yard, or if you plan on installing a preassembled pizza oven onto a metal stand, remember a couple principles of physics (and recruit a bit of brute strength to help).

For centuries engineers have built simple machines to handle heavy lifts. Two simple machines, the lever and the pulley, can help with the job of installing a preassembled pizza oven. 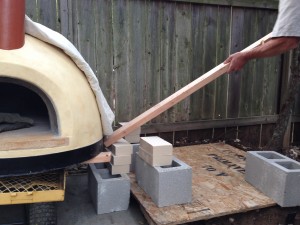 Using levers to “seesaw lift” the oven bit by bit and a pulley to hold the oven for final setting can make it possible to install a preassembled oven without a crane.

One Example: Installing a Preassembled Pizza Oven with Levers, Pulleys and a Garden Cart

Leverage makes all the difference in lifting your preassembled pizza oven off of the pallet, and in lowering it into exactly the right place. 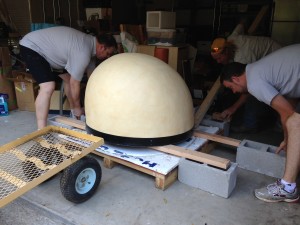 We take a few concrete blocks, bricks and a piece of wood to act as crowbar to make a simple machine. This leverage machine lifts incrementally a Primavera 70. 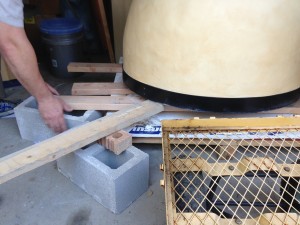 We position a concrete block just outside the wood pallet at each corner.  Another block, near the oven itself, functions as the lever’s fulcrum. The shipping pallet is nearly as tall as the blocks making the first lifts very small. 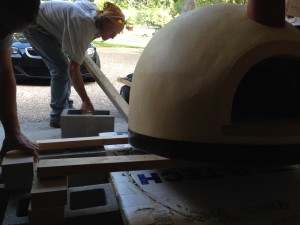 Using the lever, we gradually lift one side of the oven. While the side is lifted, we slide one block under each corner on that side. We reposition the fulcrum on the other side, lift the side and slide blocks under those corners as well. Now the oven is again level, sitting on the concrete blocks. 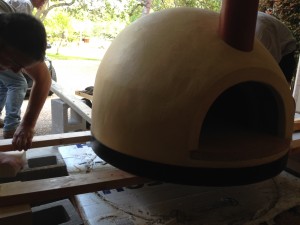 We repeat this process adding a brick under each corner. The oven ends up lifted by one block plus one brick. We do not try to go from one block to two blocks. This would create too steep of an angle, putting too much pressure on the masonry and increasing the risk of tipping the oven. 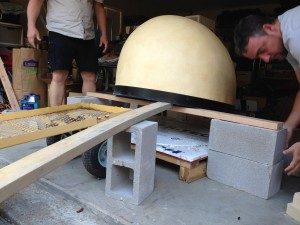 Once all four corners are at the one-block-one-brick height we reposition the fulcrum and move up to the two-block height. 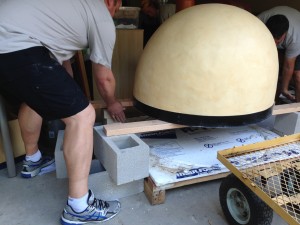 (The team is careful to keep their fingers from getting between the oven and the block.) 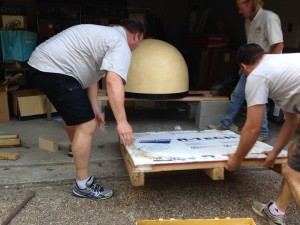 This seesaw leverage technique allows two or three guys to gradually lift the oven off of the pallet in order to move it onto a sturdy cart. 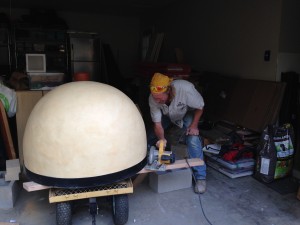 At this point we cut down the 2x4s in preparation for going through a narrow gate. 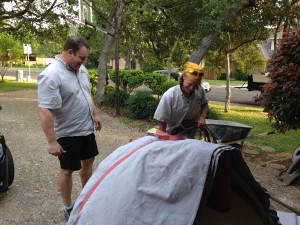 It is worth taking the time to wrap the oven carefully in moving blankets or drop cloths to protect the veneer stucco and tile. We use lifting straps during any move. If the heavy ovens start to tip it is hard to stop them so it pays to go slowly and protect your investment. 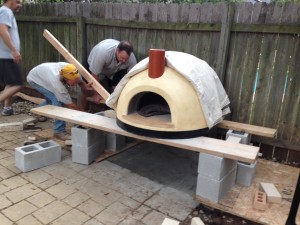 Once the oven is in position, we tackle the big lift that will suspend the oven for final placement. We repeat the leverage process to move the oven off the cart and onto stable concrete blocks, with room to pass pulley cables through. 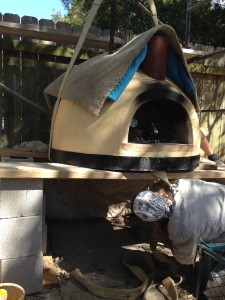 In this installation, we set scaffolding around a Primavera 70 (700 pounds). Using leverage to lift the oven sides, we slide straps around the oven, careful to protect the oven surface with blankets and padding. 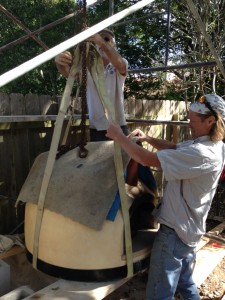 We carefully position straps away from the flue. It makes one set of cables slightly off center but protects the most fragile part of the assembly. 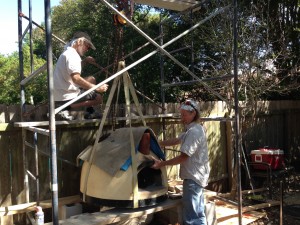 Once the oven is properly strapped, we attach the straps to the pulley and test the lift with the blocks still in place to hold the weight. 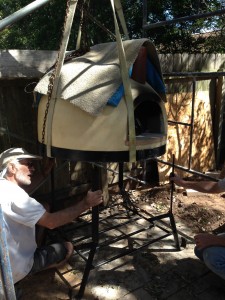 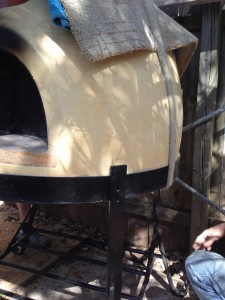 It can take some maneuvering to align the bolts and bolt holes. It’s crazy to try to jiggle the suspended oven. We lift the base up to the oven. This allows the oven to hang still while we push and pull on the base legs as needed to secure the bolts. With the bolts secure we lower the oven,  with base attached. 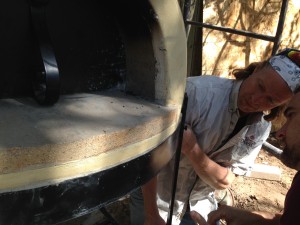 TAKE CARE WHEN ATTACHING THE LEGS AND WOOD STORE TO THE OVEN. The oven is very heavy. Be sure that you have enough manpower to safely place the oven in the stand. Failure to do so could cause serious bodily injury.