At Texas Oven we’re all about cooking with wood on wood-fired appliances. We want you to experience food that tastes better when cooked in a wood-fired environment. This week’s blog features the best wood-fired chicken which is  easy, inexpensive, and flavorful.  This serves a crowd of folks and might even win over the white-meat only eaters.

Since 1995 those cows working for Chick-fil-A have been encouraging people  to eat more chicken than burgers, and it’s paid off. For the first time in 100 years, Americans are now eating more poultry than beef and more chicken than ever before. In 1950 Americans ate 16 pounds of chicken per person, per year. By 2012 chicken consumption increased  to 60 pounds per person, per year. Why this increase? One reason is that fast food restaurants serve more chicken options because chicken is cheaper than beef. The price of chicken feed is less than the price of feed for cattle. Chicken (not the kind that wandered about your great grandfather’s farm) are fattened up on a combination of mixed grains, corn, and soy while beef fatten up primarily on corn. Right now corn costs more than mixed grains and soy. 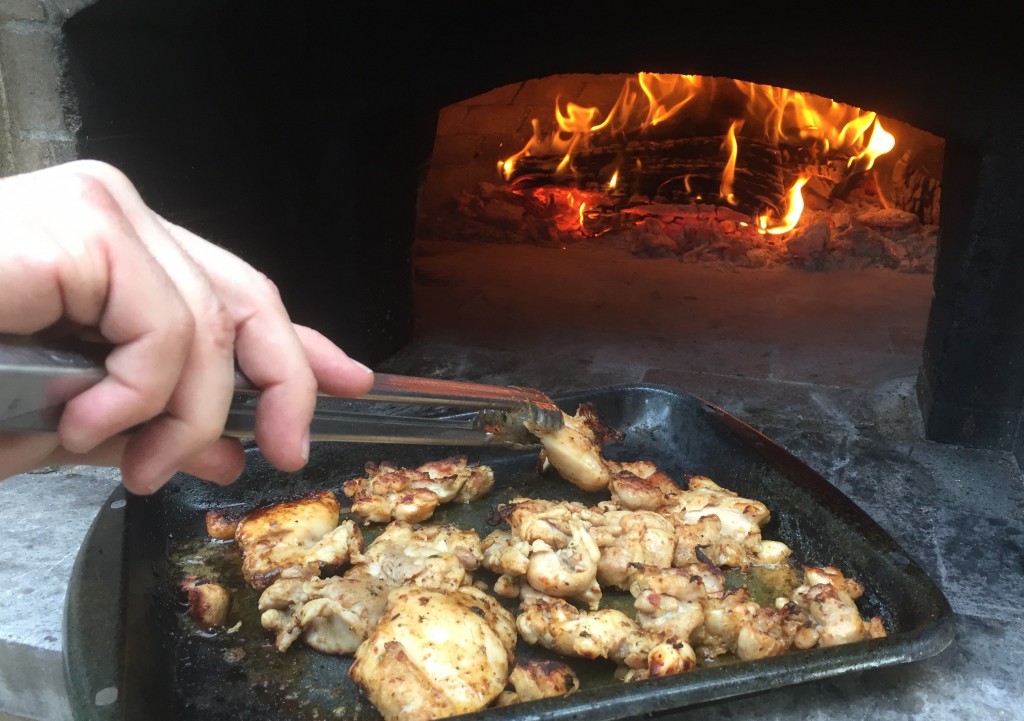 People are picky about the kind of chicken they eat: mostly white meat. About 8 out of 10 times that Americans eat chicken, they eat breast meat rather than thigh and leg meat, believing the white breast meat is more tender. But is that true? Back in your great grandfather’s day chickens wandered around the farm, taking thousands of steps in a lifetime, so no doubt their legs and thighs were leaner and tougher than those of today’s chickens. However, for best wood-fired chicken, I prefer dark meat. It’s cheaper than breast meat, and when properly prepared and roasted, it’s tender, juicy, and delicious.

I rinsed and patted dry about 2  pounds of organic chicken thighs. I made a marinade from 1 tablespoon of chipotle and adobo puree, 1 teaspoon ground cumin and 14 grams of kosher salt. I coated the chicken with the marinade and refrigerated  it for a few hours before roasting. I lightly oiled the bottom of a roasting pan, laid out the chicken so it was not crowded, and slid the roasting pan into a hot oven. The pieces roasted quickly and didn’t dry out.

This versatile chicken recipe has almost no heat, a pretty color, a nuanced flavor, and some character. It doesn’t lean toward a specific cuisine, but it lends itself to some spice/herb adjustments that will head it into any food culture you care to try.

There’s nothing so disappointing as chicken beautiful on the outside and raw at the bone. Folks at Serious Eats recommend cooking the chicken to 155 and resting it 5 minutes. Some prefer to roast chicken closer to 160 and then rest it. Government food safety recommends cooking poultry to 165.  To be sure, check the temperature of several pieces with a good meat thermometer, then let it rest for 5 minutes. I’ve tried many instant-read thermometers and this Amazon best-seller is currently my favorite.  Poultry will continue to cook as it rests, so chicken cooked to 155 reaches 160 during a short rest, and it reabsorbs juice. Cutting into the chicken before it rests, lets the juice “run out.”

To brine or not to brine

We have covered both sides of the debate on brining, with a blog about brining poultry and then a blog about the dry brine technique. I’m now firmly in the dry-brine camp. The Serious Eats analysis in the article The Food Lab: The Truth About Brining Turkey makes a pretty tight case. Plus, a simple dry brine or salty marinade is easier to manage with my limited refrigerator space. Brining (dry or traditional method) is less significant for roasting thighs and legs compared to breast meat. However, the brief (2 hours) marinade for our roasted chicken makes a difference because salt relaxes the protein surrounding the muscle fibers. When the muscle fibers are loosened, they don’t shrink and contract as much when the meat is cooked. This makes the meat more tender and juicy. 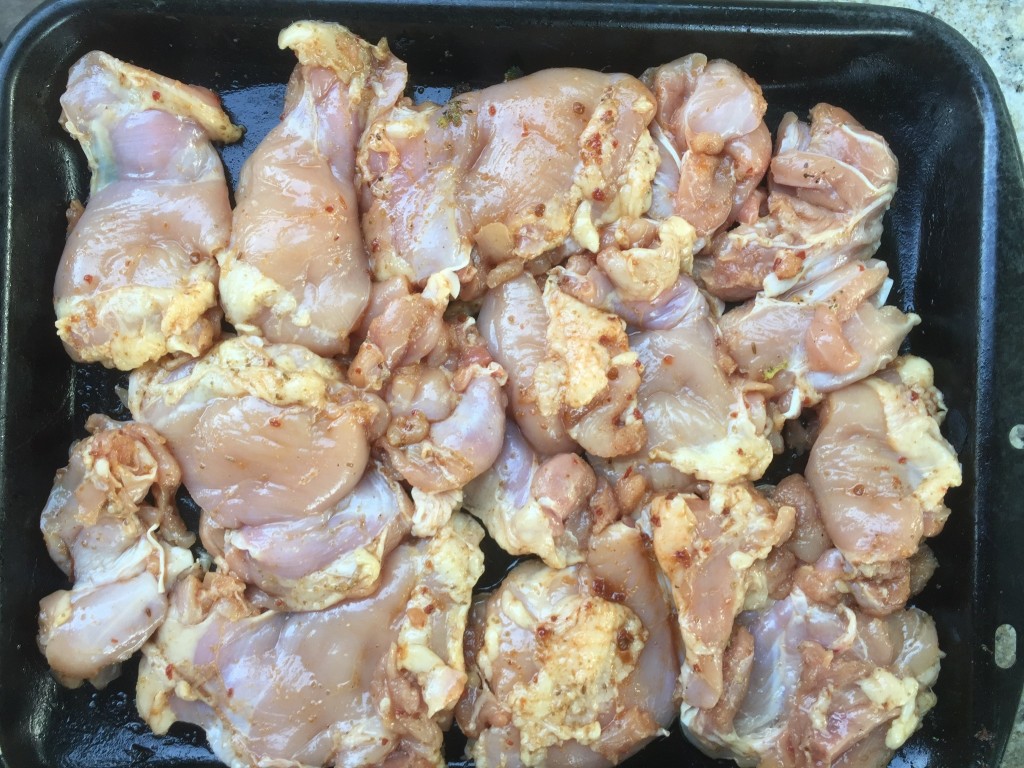 Did you know that cumin is the most widely used spice in the world? The general population in America has a relatively new acquaintanceship with cumin, thanks to (it pains me to say) it’s introduction through Taco Bell in the l960s. As a global commodity, cumin has long been high on the list of favorite spices. Think adobos and garam marsala. In a study of the most common ingredients in 39 world cuisines, cumin is the most popular spice. It appears in the earliest written recipes, the Yale Collection dated 1750 BC, and was recorded as a pantry essential in ancient Rome.

The taste of cumin is warm, pungent, sweet, and sharp. It is a member of the parsley family, as are caraway and dill. Cumin has become a go-to spice in our house because my family loves Mexican and Indian foods. I used a little cumin in the recipe to add depth and complexity without an overpowering taste. This is just the right amount of cumin to lend a mellow warm flavor on its own and provide a foundation note in tune with cuisines from many regions. 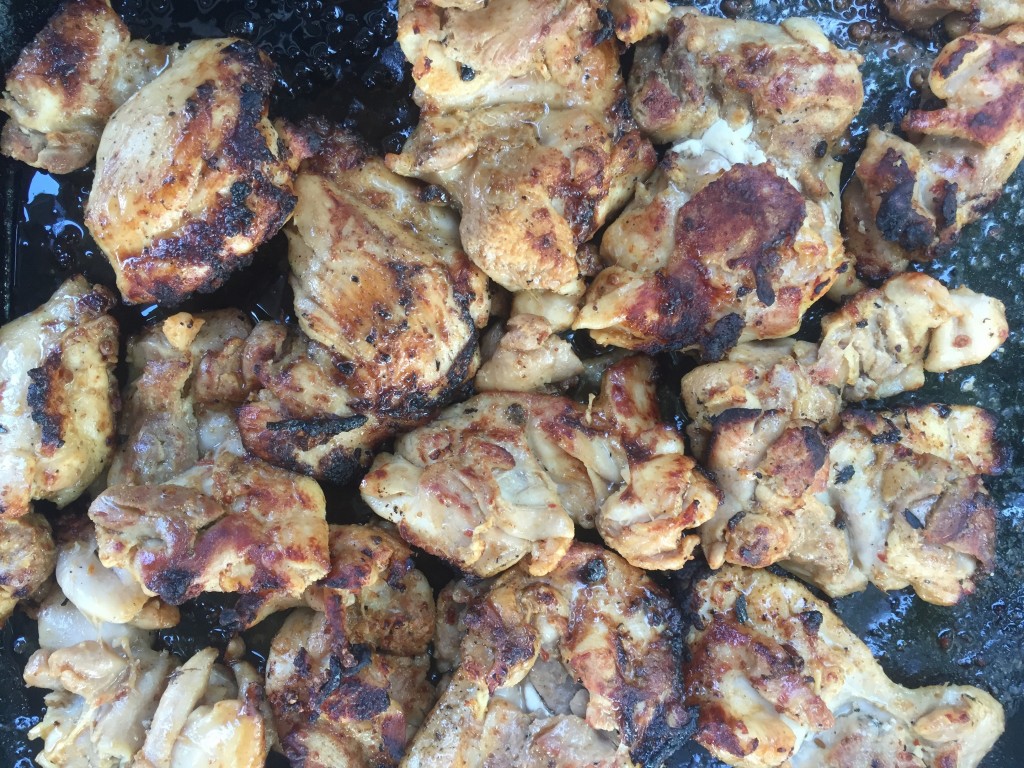 The ancient Roman kitchen was stocked with cumin, and most of us have a few herbs and spices we keep on hand. My pantry is stocked with chipotles in adobo sauce. For me, this is worth re-stocking when I’m down to only a half dozen cans. Like cumin, the adobo sauce is a great flavor deepener/enhancer. I included it in the wood-fired chicken recipe for just that purpose—to add character without overwhelming heat. After opening a can or two of chipotles in adobo sauce, I put them in a container and puree with an immersion blender. The puree keeps for a long time in the refrigerator and adds interest to just about any food—either the straight puree, or puree blended with mayo, with sour cream, or with yogurt. Try it with eggs, sandwiches, soups, and chili (of course). 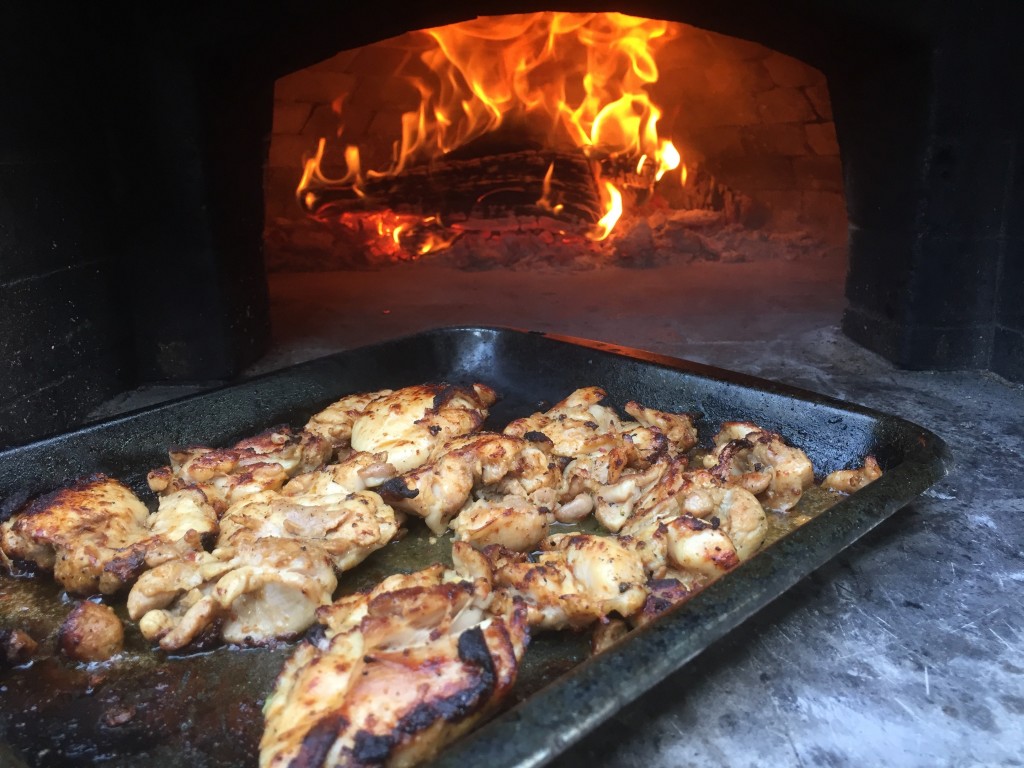 Back to the reasons why folks prefer chicken breast meat over dark meat. For some it started as a texture preference, later bolstered by a concern for the amount of fat in dark meat compared to fat in white meat.  It is true that white meat has less fat than dark meat, by about half. But it is not scientifically proved that eating breast meat is healthier for you because it has less fat. Dark meat is nutritionally good for you as it contains more zinc, selenium, riboflavin, vitamins B6 and B12. Its color comes from the iron protein myoglobin which helps muscles transport oxygen to the cells.

But the big question is fat. For the last 25 years it’s been commonly accepted that the practice of restricting fat will improve health and enable weight loss. But what if that’s not true? In her book The Big Fat Surprise Nina Teicholz documents nine years of research showing “why our bodies are healthiest on a diet with ample amounts of fat…that include meat, eggs, butter, and other animal foods high in saturated fat.” I found her book an interesting read. It sparked my desire to study how we came up with a low-fat diet, if fat makes you fat, and what is the latest scientific research on these topics.

Cooking in an ancient-style oven, it’s hard not to reflect on historical eating patterns too. Which leads us to…

What happens to all those legs and thighs that Americans don’t want and won’t buy? That we can buy “parts” rather than whole chickens is a train of thought that could lead to where we don’t want to go in this blog. It’s better to know that dark meat doesn’t go to waste—it’s exported, primarily to Russia. The Russians like the taste of dark meat and import “stunningly large quantities” of it. Producers in the United States are developing other markets for dark meat in Eastern Europe, in Asia, and in Latin America because even humble chicken parts become subject to trade restrictions.

With high-heat roasting, you might find that dark meat is your new favorite. The cooking environment in a wood-burning oven just works with the higher fat content both in terms of flavor and margin for error. As with many vegetables, people find that they like the wood-fired version of something they normally don’t enjoy.

Enjoy chicken—white or dark—cooked over wood fire, or roasted in your conventional oven. The chipotle/adobo sauce works wonders on dark or white meat cooked in either environment. I often choose legs and thighs because they are higher in fat and they are inexpensive which makes it easier to upgrade to organic, even when feeding a crowd.