Did you know that the Nabisco Company dropped the word “fig” from their famous bars? The Fig Newton bar, invented in 1892 is now called a Newton, because “figs don’t really scream cool and exciting” anymore. The Newton Bar comes in a variety of flavors, because choice is what matters today. People want more choices and have moved on from this ancient fruit.* 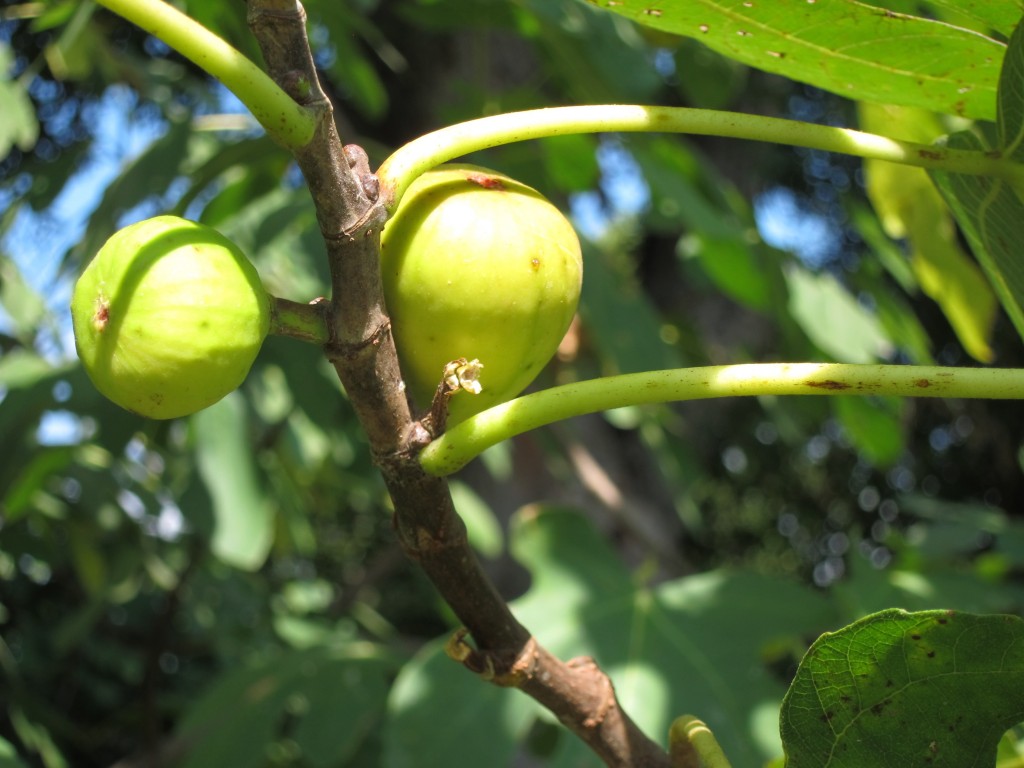 However, in terms of variety, there are plenty of choices to make among figs—black, green, purple, brown, amber. Adriano’s Fig Trees, Etc. of Canada lists over 150 varieties of figs, and here in Texas we have Brown Turkey, Texas Everbearing, Black Mission, Alma, Celeste, Kadota and Blue Giant. I hope you will be tempted by the picturesque names to pick up some local figs while they are available in the market.

Are figs cool and exciting? Just taste fire-roasted figs topped with melted brie, before you pass judgment! I’ve included two of my favorite fig appetizers that are always a hit with guests: bruschetta with fig, arugula, and brie and roasted figs with goat cheese and bacon. 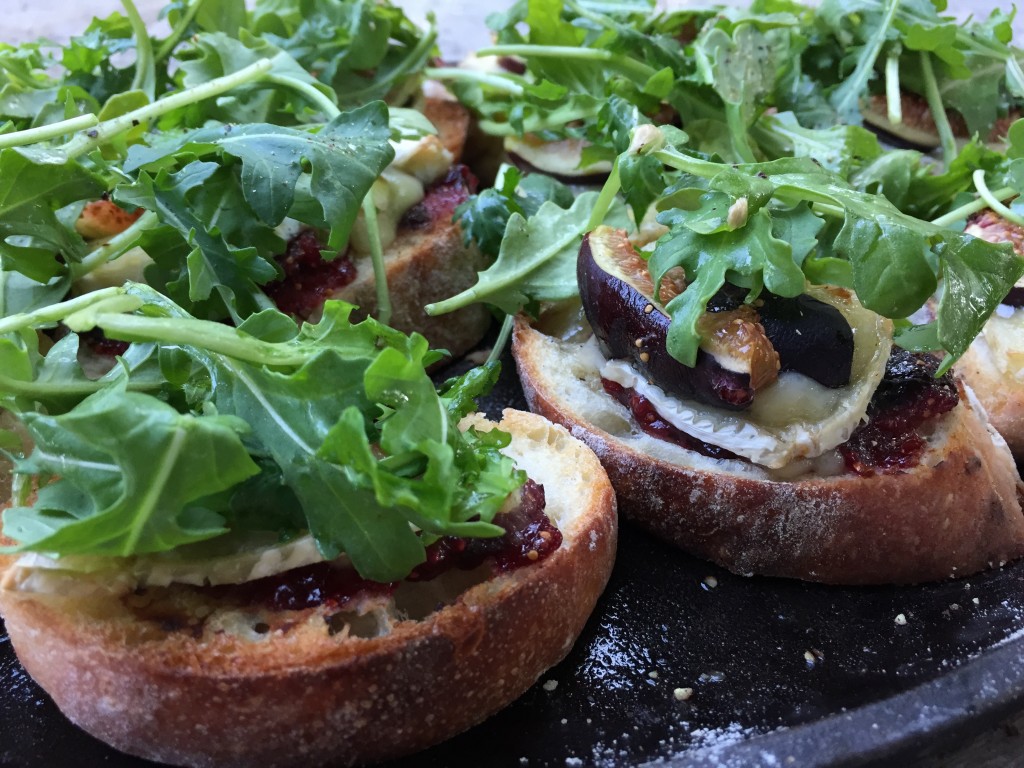 A classic use for day-old hearth bread is bruschetta. This version combines the sweetness of fire-roasted figs with creamy brie and spicy arugula.

Not only do these appetizers taste delicious, they are good for you. It is said that the early Olympians ate figs as their primary training food. The Romans ate figs to look younger and have fewer wrinkles. Some ascribe to figs anti-diabetic properties, along with providing fiber and a good dose of potassium. 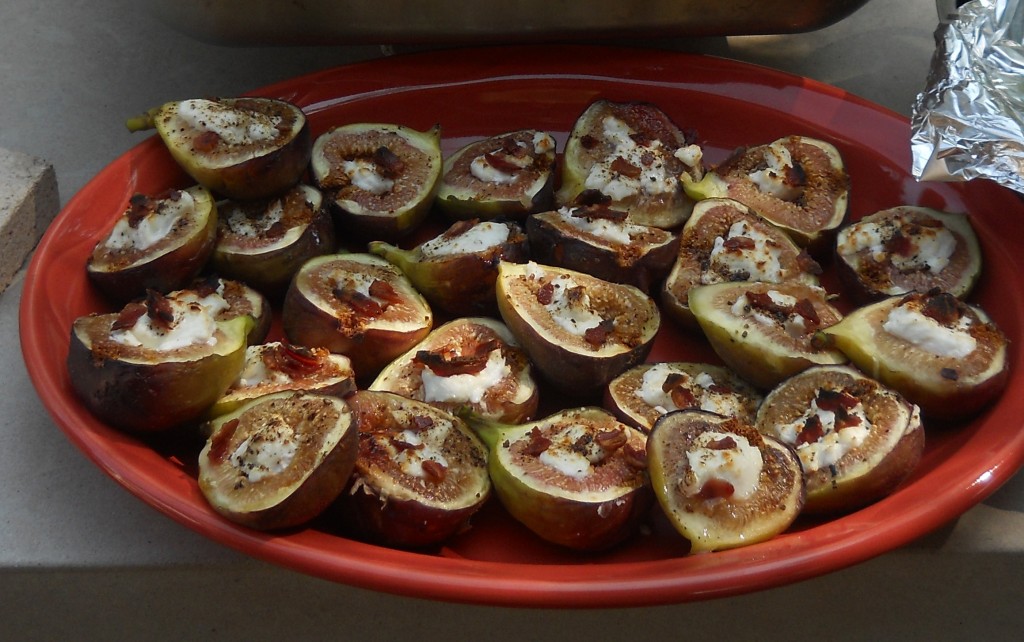 Here in Texas figs are still in season through September according to Texas Farm to Market. I’ve found beautiful figs at Whole Foods and HEB, but they are quickly snapped up. Don’t miss out on this delicious late summer, early fall favorite.

Bruschetta with fig, arugula, and brie

Slice your favorite hearth bread, like sourdough or French, about 1/2″ thick
Quarter figs lengthwise
Lightly drizzle bread with olive oil and turn oiled side down on oven-safe pan
Spread the tops with fig, apricot or other mildly sweet jam (photo shows is a mix of fig and plum)
Top each toast with a slice of brie
Arrange one or two fig pieces atop the cheese
Roast in wood-burning oven (or under a broiler in a conventional oven) until figs caramelize
Just before serving dress arugula with olive oil, fresh lemon juice and black pepper 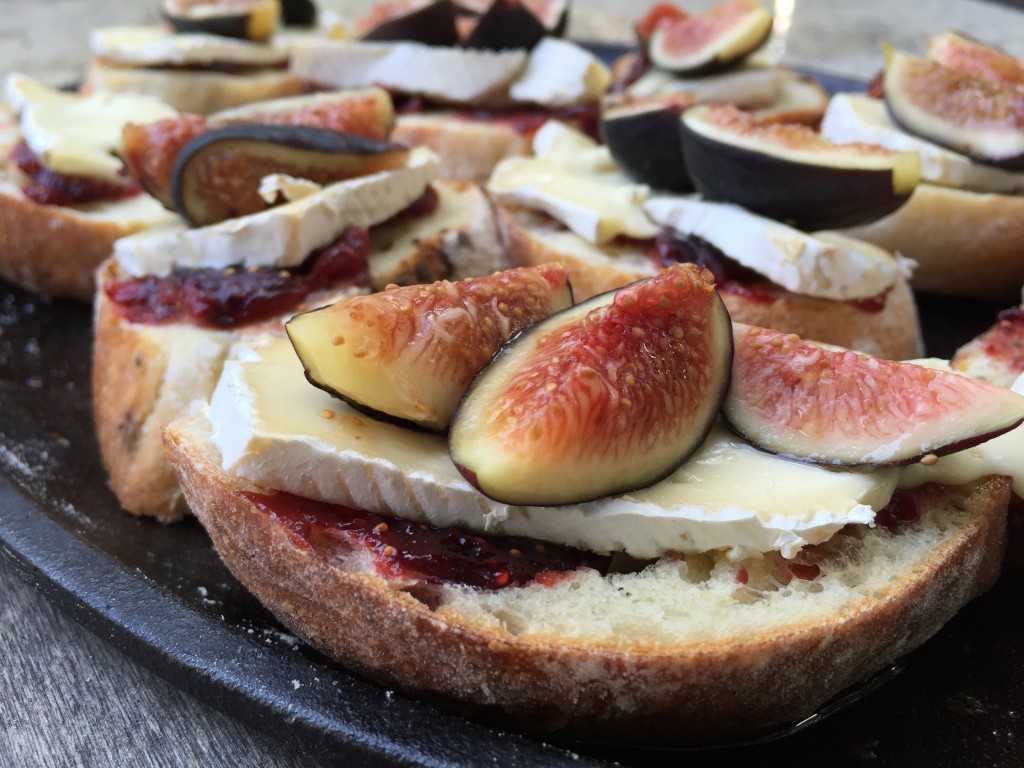 Fig and brie atop crusty artisan bread with fig and plum jam ready to toast. Dress with peppery arugula before serving.