What are poblano peppers?

Wood-fired poblano peppers are one of my go-to summer foods. Poblanos are thick-walled, slightly heart-shaped peppers ranging in color from dark purplish-green to reddish-black. Poblano peppers originated in Puebla, Mexico and play an important part in traditional Mexican food. When dried, a poblano is called an ancho. And when it is dried and smoked, a poblano (like a jalapeño) can be called a chipotle. Often when I’m not working with whole peppers, I love that smoked chili puree provides a quick flavor boost. Because they are low in heat, poblanos are the choice pepper for flavorful dishes that appeal to all palates. 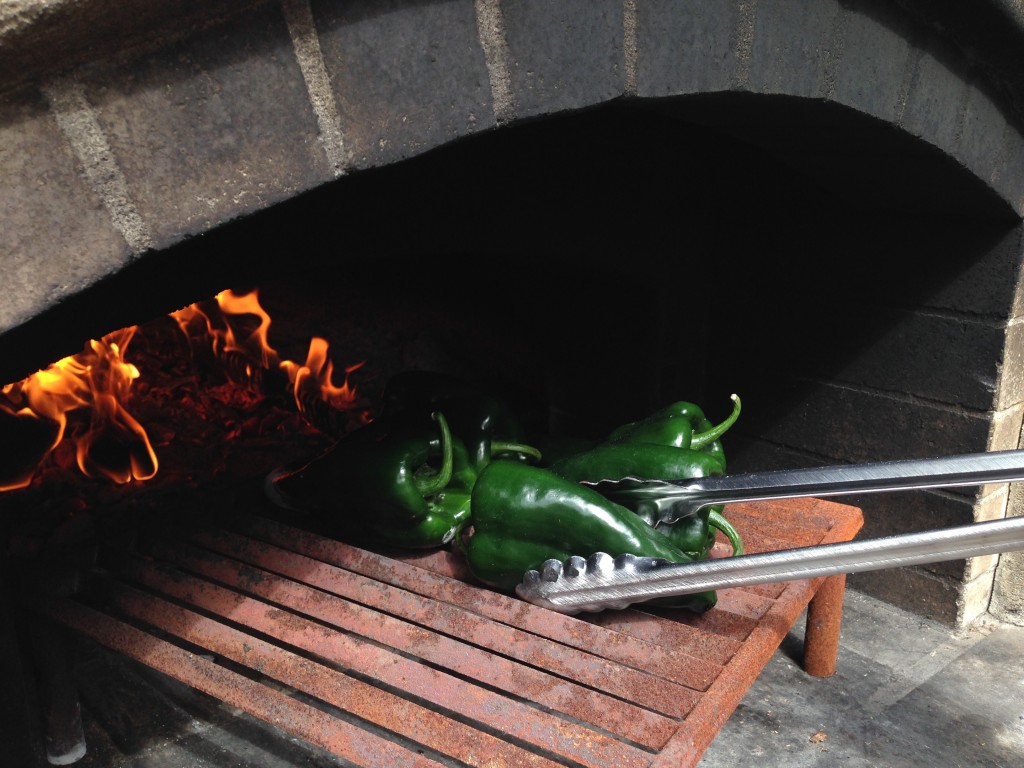 Some of today’s popular chili peppers add significant levels of heat. My family falls into two camps–some of us love high heat, and others don’t. The summer cream sauce featured in this blog relies on wood-fired poblanos for color, texture, flavor, with little heat, so the sauce is a winner for the whole family. It makes a wonderful soup, topping for  for vegetables, filling for omelets, garnish for tacos, and more.

What is the Scoville index?

Anyone cooking with peppers has run across the Scoville heat index, invented in 1912 by Wilbur Scoville.  Mr. Scoville determined that no chemical test for spiciness could be as accurate as the human tongue, and so he devised a subjective scale, the Scoville Organoleptic test. An alcohol-based pepper extract is progressively diluted in sugar water and tasted until its spiciness can no longer be discerned. The amount of water required dictates the rating; a jalapeño takes about 5,000 parts water to one part pepper to neutralize the heat, so it is rated at 5,000 Scoville heat units (SHUs).

A pepper’s strength of heat is reported in Scoville units, ranging from the lowly bell pepper with zero units to a pepper called “Smokin’ Ed’s Carolina Reaper” at 1,569,300 Scoville Heat Units. A Google search on Scoville brings up amazing lists of peppers with florid names and zany heats. Not surprising there’s competition worldwide to produce the hottest peppers and to accurately measure their heat. The poblano measures about 1500 Scoville Heat Units, which is considered mild. 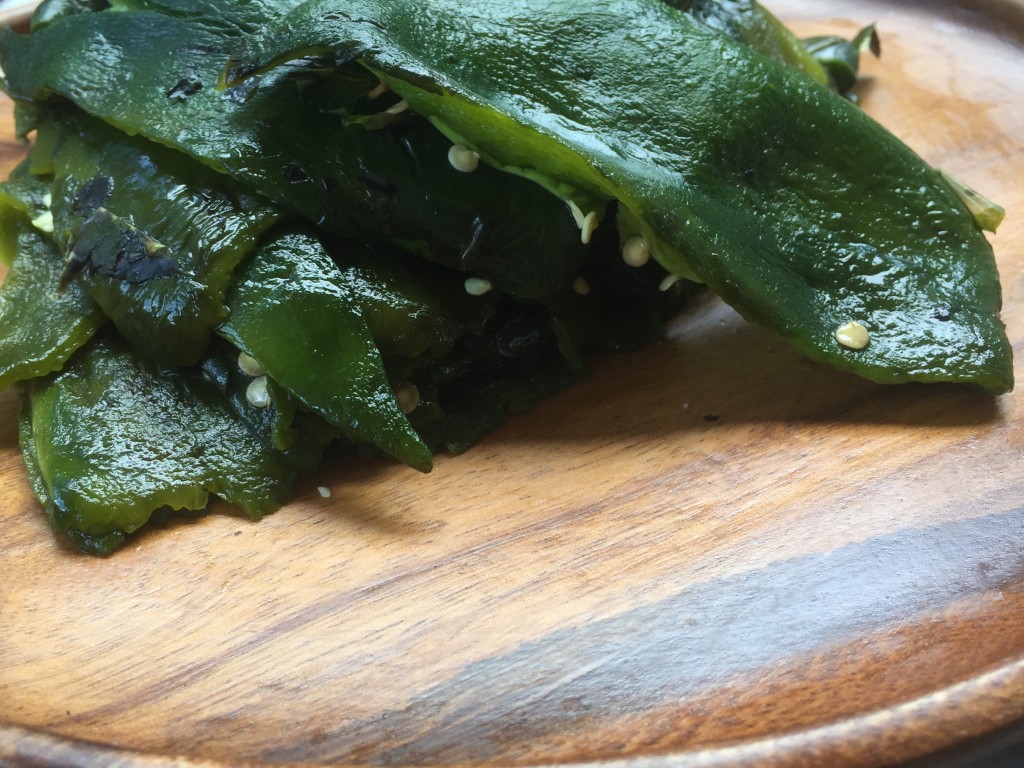 How to use wood-fired poblano peppers

Roasting poblanos brings out their flavor through char and blister. Once the peppers are charred and peeled, I stuff them for no-fry chile rellenos or dice them for salsa and soup. These also lend a flavor boost to pepper and onion mixtures for fajitas and other Mexican classics. Poblanos are a cook’s best friend when it comes to adding flavor without overpowering heat! They’re great in scrambled eggs, sausage, chili, salsa, dips. I sometimes puree wood-fired poblanos and freeze portions in ice cube trays as an easy way to upgrade a dish later on.

It’s hard to beat the taste of almost anything prepared in a wood-fired oven. In the high heat of the oven, food cooks quickly without drying out. Poblanos quickly char without overcooking and losing their sturdiness–so important when using them for filling. A touch of wood smoke creates chemical changes that make food taste so good. That’s why we have lingering memories of roasting hotdogs over a campfire. Since owning a wood-fired oven, I appreciate the same reaction to food cooked over wood: “mmm,” “this tastes so good,” “what did you do to this meat?” 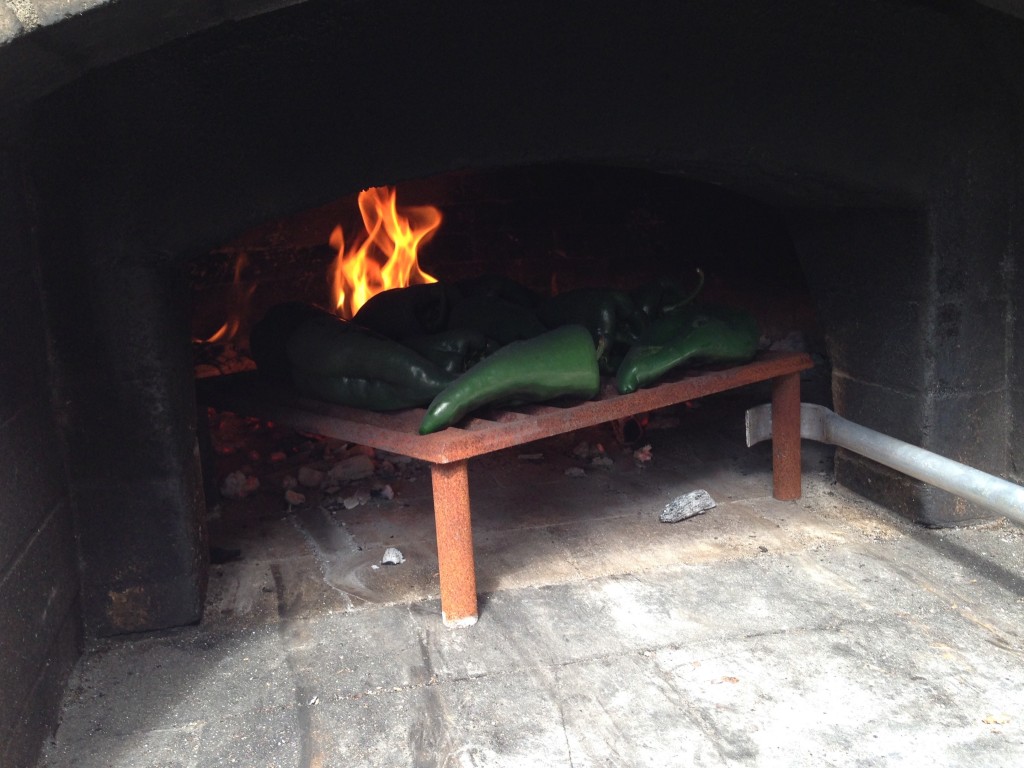 Watching a professional chef in action is an education in the importance of preparing the ingredients that go into sauces. They build layer upon layer in dishes that look simple and taste spectacular. That’s why the poblanos in my recipe are prepared to maximize the part they play in the recipe. It’s not just any poblano that goes into the summer cream sauce, but one that’s roasted to stand out for flavor, color, and texture.

Although you can char poblanos in a pan set on the oven floor or skewered on a roasting stick, my favorite way is to use the Tuscan grill. Heat circulates freely around all the peppers, and you can push the grill around with the bubble popper tool to closer or farther away from the fire. With the all-around heat in a wood-burning oven, you may not even need to rotate the peppers. Be prepared for them to cook quickly. 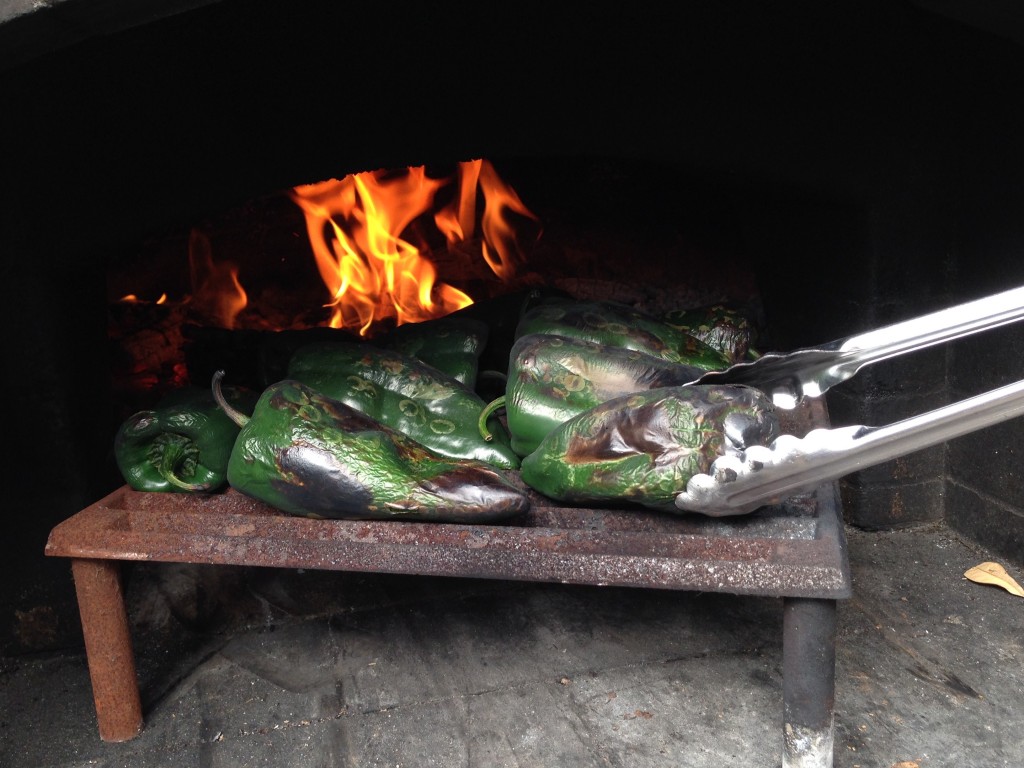 As you see in the photos, I’m using a Tuscan grill, tongs, and a bubble popper. When the pepper skins are charred and blistered, I take the peppers out of the oven and let them rest in a covered pan until the skins loosen. I pull or slide off the loosened skin off. Disregard advice to peel the skin under running water! If a few bits of charred skin don’t release, they add another level of flavor. 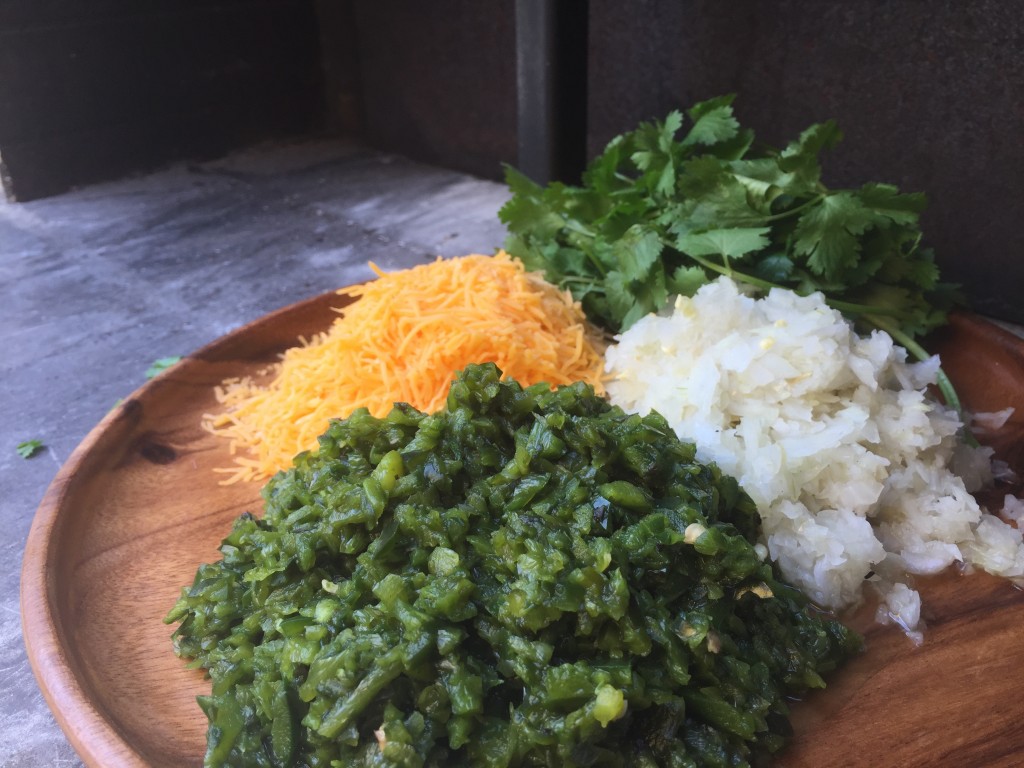 You can make an easy summer cream sauce by adding poblano, onion, cheddar and cilantro to a basic bechamel sauce. For a richer sauce you can skip the flour-based roux and make a cream sauce 1 oz melted cream cheese for each cup of whipping cream. At the end, add fresh cilantro for brightness. 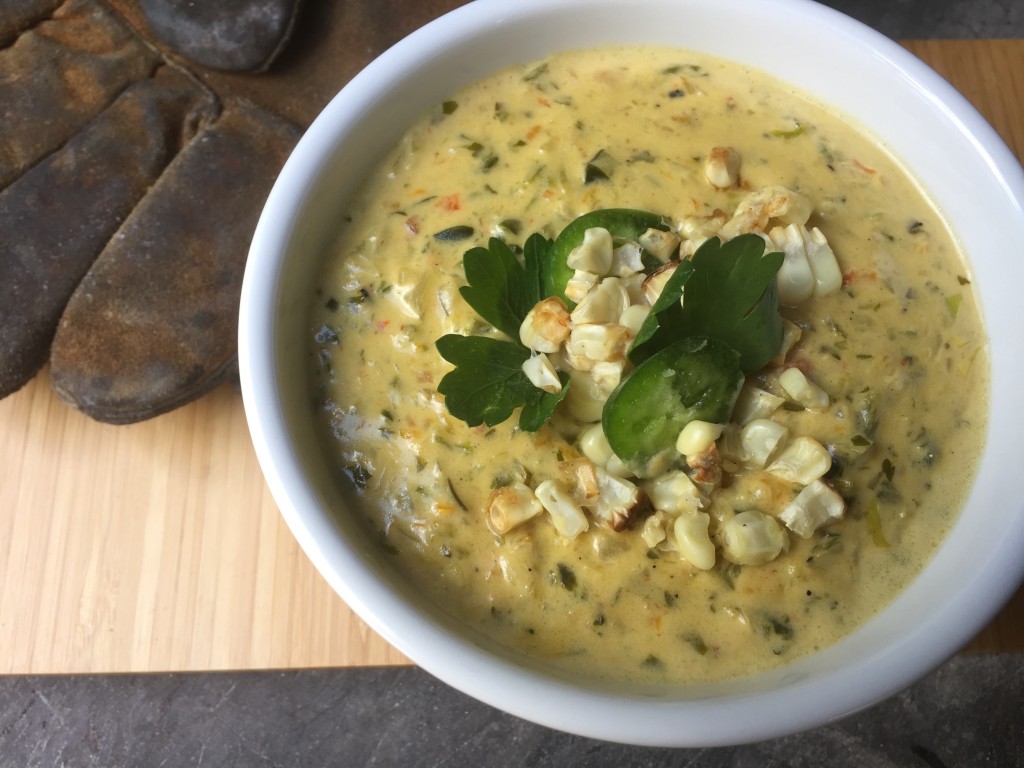 Advancing into the pepper world

Today the pungency of peppers is measured by high-performance liquid chromatograhy. This objective measurement accurately gauges the capsaicinoid compounds of a pepper in American Spice Trade Association Units. One ASTA unit x 15 equals a Scoville Heat Unit. Out of deference to the work of Wilbur Scoville, pepper  heat continues to be reported in SHU.

For some eye-opening data into the world of peppers, check out the extensive list put together by Cayenne Diane. These fiery dudes are not for the timid: Carolina Reaper, Trinidad Moraga Scorpion, Komodo Dragon, Naga Viper, Tiger Paw, Devil’s Tongue Red, White Bullet, etc. 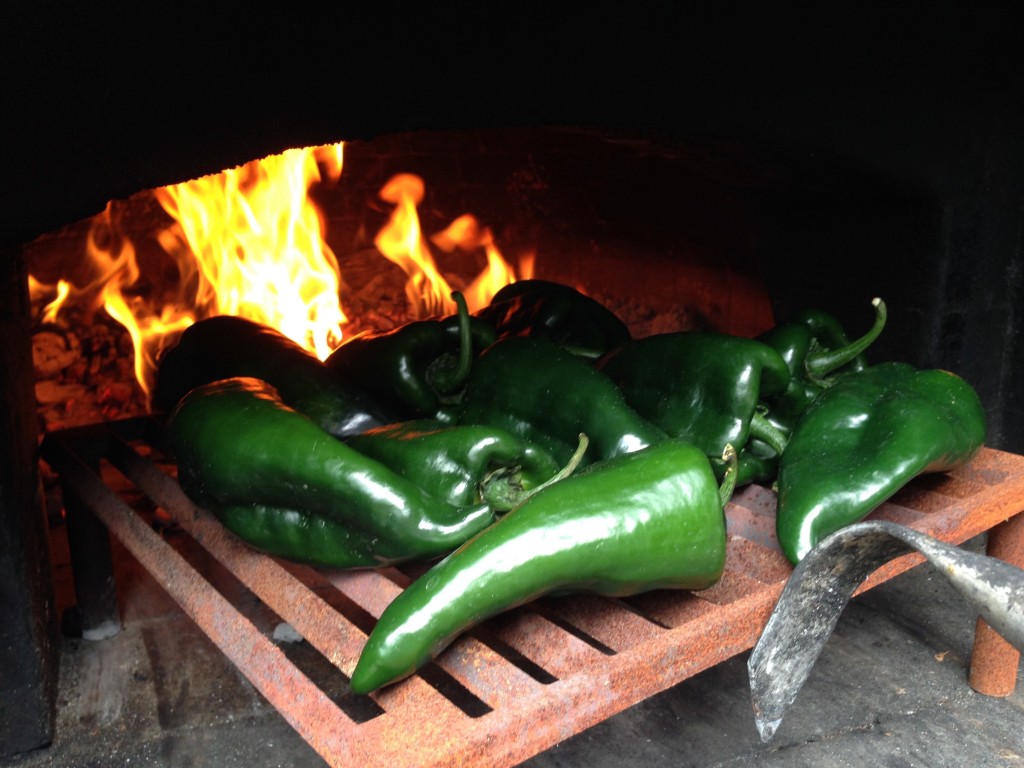 Watching Youtube clips of eating the Carolina Reaper? Not for me!