wood-fired asparagus is a spring star

One of my favorite appetizers is wood-fired asparagus. One of spring’s signature vegetables, I think of asparagus as a peak performer for two reasons: it reaches its best flavor and value in the spring, and it makes a beautiful and easy appetizer for entertaining around a fire. While my oven heats up for high heat cooking, I slide in a roasting pan of prepared asparagus for a few minutes—just enough time to add some heat, a touch of wood-fired flavor, and maybe a bit of char. Fresh asparagus, locally grown, and quickly cooked in a wood-fired appliance, will have guests asking, “what is your recipe for this?” The recipe can’t get much simpler than olive oil, salt, and a brief encounter with heat.

During the reign of Louis XIV of France, asparagus was known as the “food of kings,” and the ancient Roman nobility  sent out “asparagus fleets” to gather the delightful vegetable for Rome. It is said that Caesar Augustus sent his fastest runners carrying fresh asparagus spears to the Alps where the spears were “frozen for later use.” In addition to its taste, asparagus has been touted as an aphrodisiac, an antidote for fatigue, a remedy for toothaches, and a palliative for hangovers. Whole Foods predicted asparagus to be one of the most popular vegetables in 2017, especially the purple variety–the color purple being associated with antioxidant benefits.

However, it is not a favorite vegetable with some folks, about 40% of the population. During digestion the natural asparaguric acid breaks down into  sulfur-containing compounds which can create an odor in urine. Although it is a harmless and short-lived by product, it can be unpleasant. With a little humor, the authors at Serious Eats call this phenomenon PASUD. 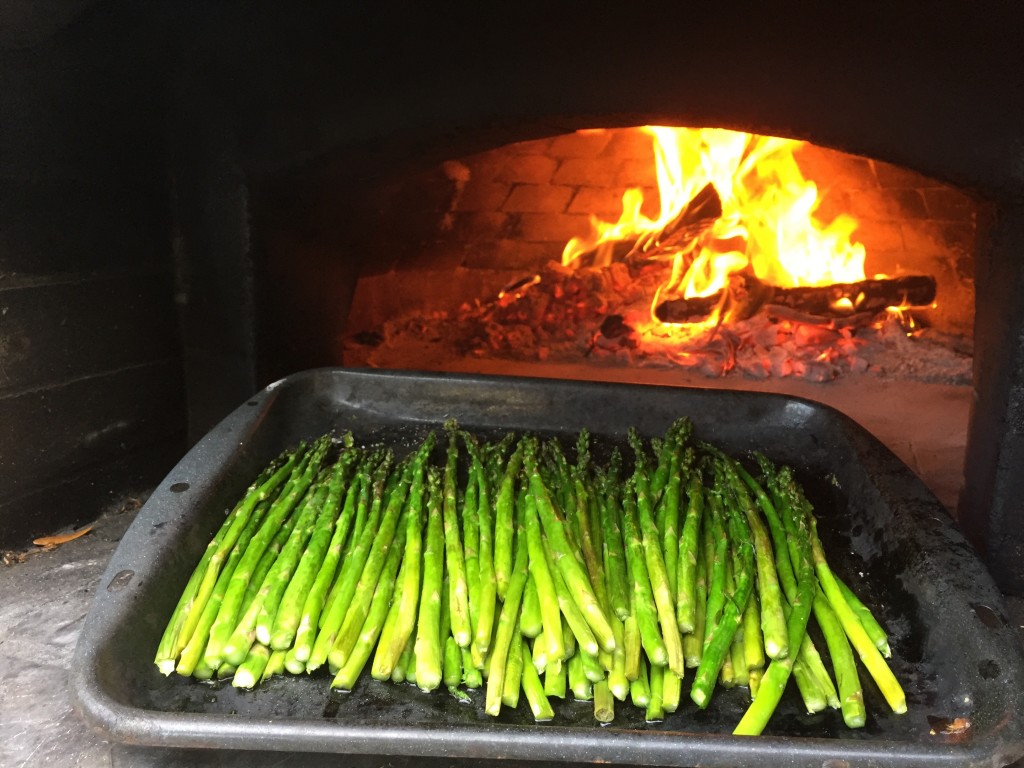 Roasting assertive vegetables such as brussels sprouts and cauliflower in a wood-burning oven mellows out their sharp taste, and moves them into the realm of favorite vegetables. The aromatic compounds released by burning wood add flavor to whatever is being cooked. Fresh asparagus has a mild taste that doesn’t need the same transformation as the cruciferous veggies. But a touch of smokiness, char, and heat, combined with salt and olive oil makes wood-fired asparagus a star of spring.

Local asparagus is available in Texas from January through March and April. Farmers markets began featuring asparagus in March. Although you can buy asparagus year around–grown someplace–the most healthful, best-tasting asparagus is fresh and locally grown.  Natural sugars that give asparagus its delicate flavor deteriorate once the spears are picked. Best to eat them right away or refrigerate.

With room to do a little planting, you can be guaranteed a crop of asparagus with minimal work. Asparagus is a perennial and will continue to put out spears for 20 years –if it is carefully planted and kept free of weeds. It can be grown from seed in little pots and transplanted to a prepared bed. More commonly it’s grown from crowns that have an established root system. Crowns set into a prepared bed in early spring may produce a few spears the first year. By the third season, plants will be well set to produce an abundance, with the help of a little compost and organic fertilizer. In late spring to early summer, the growing period ends. Asparagus then sends up lacy fronds that store energy into the plant for next year’s harvest. The red berries containing asparagus seeds are mildly poisonous, causing abdominal pain and vomiting. 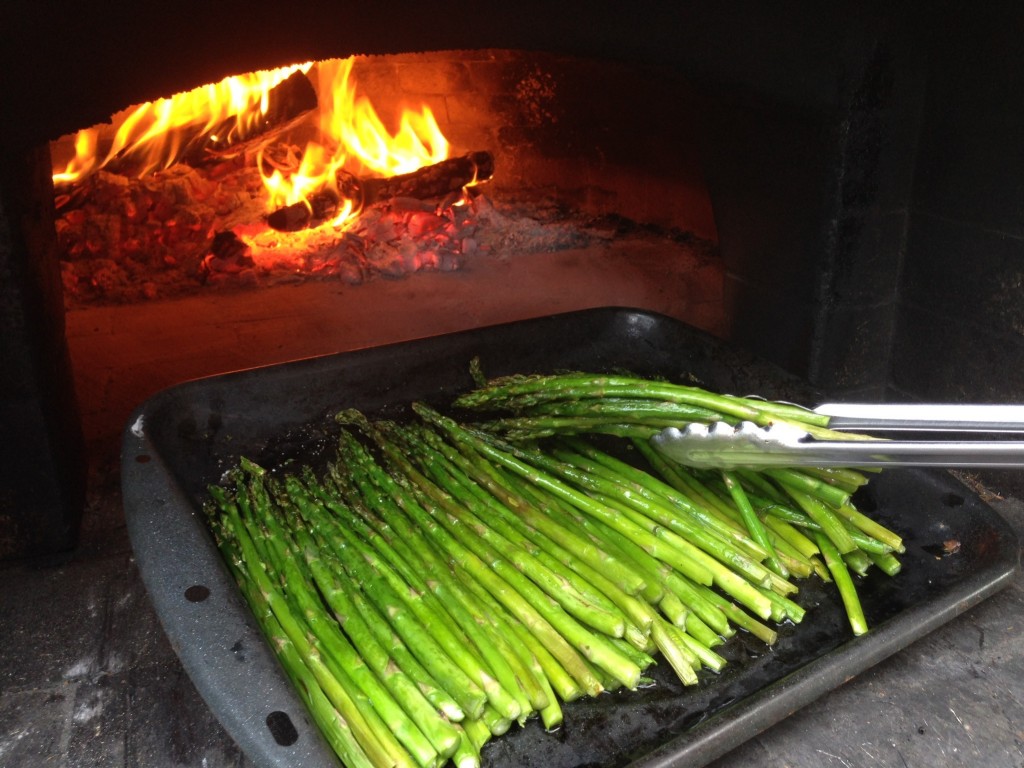 If you buy asparagus from the farmers market or grocery, choose firm, bright stalks with tightly closed tips. Asparagus that appears dry, twisted, woody, or with opened out tips is beyond its prime. Remove the tough ends of the stalks before steaming, stir-frying, or roasting the asparagus. Is it better to break off the tough ends of the spears or to cut them with a knife?  Whether you break or cut doesn’t affect the taste of the spear. For a uniform appearance, line up the spears on the cutting board and slice through the stalks where the green fades to white. If you have any uncooked asparagus to store, remember it loses sweetness and nutritive value quickly. Store it in the refrigerator, upright, in a glass of water. 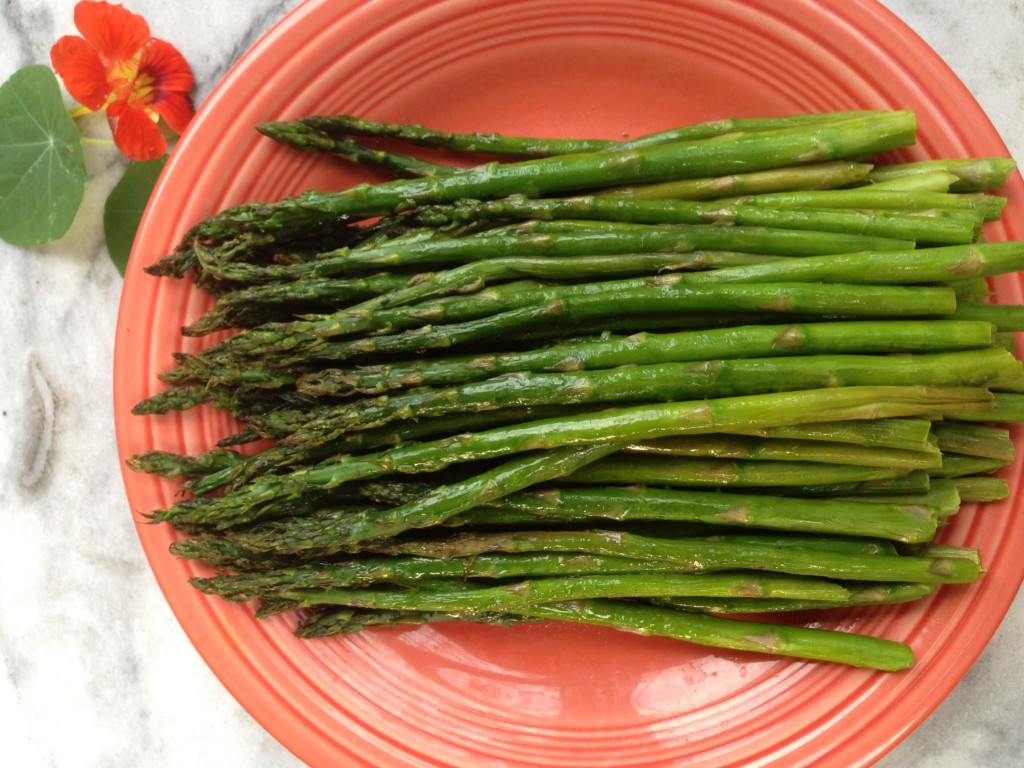 Asparagus comes from the Greek word asparagos which means sprout. It is a member of the lily family and is related to garlic, onions, and leeks. Asparagus is nutrient dense, has a low glycemic index, is clean (not necessary to buy organic) and high in fiber. It is a source of iron, vitamins C, B1, B2, K, copper, selenium, and chromium.

There are a number of health-related reasons to include asparagus in your menu. It has de-toxifying properties that neutralize free radicals and inhibit cell damage. It is a good source of fiber. It is a natural diuretic that helps the body excrete excess salts. It contains inulin which supports good gut functioning. It supports insulin in transporting glucose to the cells. Through B12 it boosts mental and cognitive functioning.

One of the lesser known asparagus myths is that the white variety from holy ground in Germany’s south fields is the best asparagus. Actually any asparagus tastes better and is better health-wise if you buy it locally rather than having it shipped in from a distance.

Another myth ascribes aphrodisiac qualities to asparagus, but after some investigation, it was determined that it just looks sexy.

Is it true that asparagus tastes better if you eat it and drink either red wine or beer? Not true. Both red wine and beer contain tannins that make the taste of asparagus bitter.

What about asparagus as a cure for a hangover? Not a cure, but apparently a slight alleviator of symptoms—if you are willing to drink 3 cups of asparagus juice.

Wash, dry, and trim asparagus. Place in an oven safe roasting pan and toss with olive oil and salt. Slide the pan into the oven with a good fire going (or under a conventional broiler) and give them a check after 5 minutes. As with any cooking in a wood-fired oven, wood-fired grill, or even a conventional broiler, it’s important to keep an eye on how fast things are cooking depending on the heat. When the spears are done to your liking (personally that means bright green with some nice crunch left), transfer them to a serving plate and eat as an appetizer. They are also great sprinkled with parmesan cheese. Any leftovers look beautiful rolled with a bit of flavored cream cheese in a slice of lunch meat. 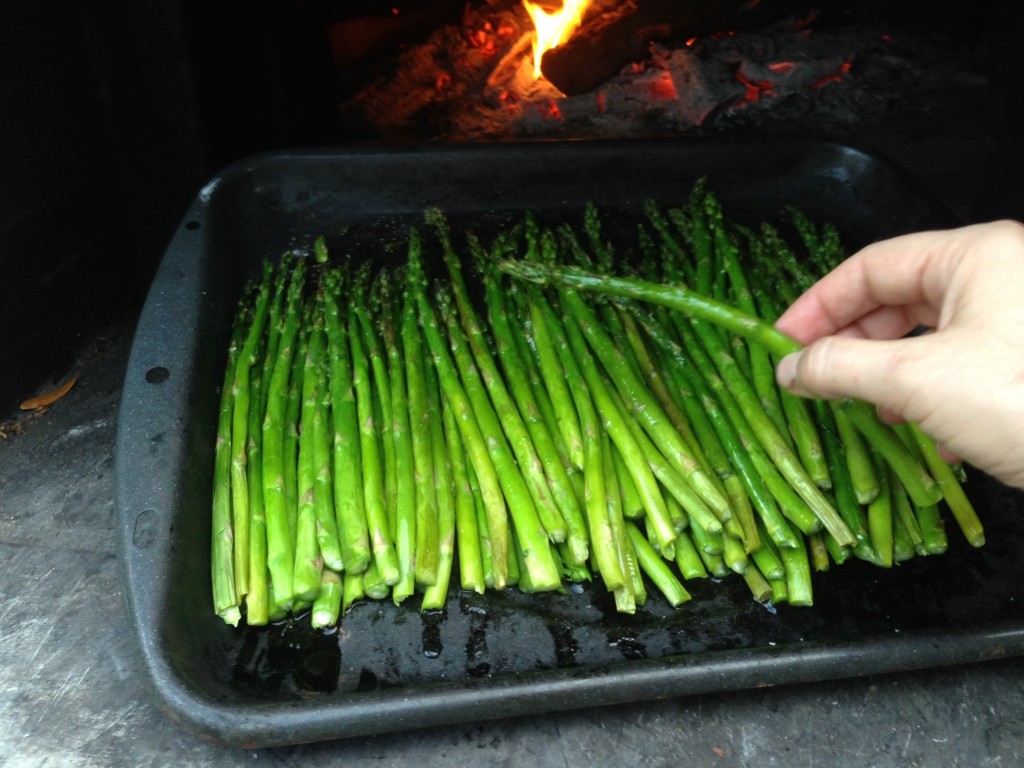 I’m including the brussels sprouts directions because they make a great appetizer, too. Preparation is similar, a good toss with olive oil and salt in a roasting pan, then into the oven for 10 minutes or so, until they’re tender and slightly charred, and any stray outer leaves have crisped into french-fry-like goodness. Unlike asparagus, for Brussels the higher the heat the better they seem to taste.

We’re all about cooking with wood and inspiring you to try new foods in your oven. Wood-fired asparagus and brussels sprouts are easy to do, plus being delicious as appetizers or sides, and are surprising favorites with guests.