Nine of us were sitting around the dinner table discussing the question, “What is the best way to cook brisket?” It led to a lively conversation with lots of advice and opinions: wrap in foil, fat on top, fat underneath, trim off the fat, spice rub, marinade, Dutch oven, brick smoker, grill, 14 hours, 3 hours wrapped, smoked at the last, smoked at the beginning, started/finished in the conventional oven, mesquite chips in water, liquid smoke, left brisket, right brisket, smoked non-mesquite, grill then smoke, dry is best, moist is best, falling apart is best, tidy slices are best. All the guys were experienced “grill-masters,” and smokers, but none of them had ever cooked in a wood-fired oven. However, they were keen to understand the merits of cooking brisket in yet another way, because Texans are down right passionate about brisket.

Most resources agree that it’s best to maintain a low temperature and longer cooking time for cuts of meat that have a lot of connective tissue (collagen). The collagen fibers, likened to cables, begin to melt into a tender gel at 120 degrees and continue to 160 degrees. Better cuts of meat like steaks have less connective tissue and can be cooked “hot and fast.” Key to cooking a tender brisket “low and slow” is to maintain the moisture level by wrapping the brisket in foil, fat side up—or smoking it in a moist environment, like a firebrick oven.

It’s easy to maintain a consistent low temperature in a wood-fired oven because the firebrick and other conducting materials absorb and hold heat efficiently. Once a live-fire has burned down and is removed from the oven, the firebrick slowly cools through temperature ranges appropriate for cooking different things—artisan breads, conventional baking and roasting, braises and slow-cooking.

Because a wood-burning oven maintains appropriate stored heat for slow cooking, when you’re doing brisket, you can focus on adding a smoky flavor. All that’s needed is to light a small fire with a few soaked wood chips. Push the smoky fire to the back or side of the oven and put the seasoned brisket in the oven as far away from the fire as possible. Use the oven door to regulate smoke and temperature in the first two hours, then close the oven and tightly and let the retained heat do the rest. As the brisket cooks, there’s plenty of room for a pot of beans or other low-and-slow dishes to share the heat.

When the brisket comes out of the oven and sets up for slicing, it’s an ideal time to rev up the heat by refreshing the coals to quickly cook other side dishes. One of the biggest advantages of cooking in a wood-fired oven is that you can prepare the whole meal from one firing. Breads, vegetables, pastries, fruits, nuts and seeds—all can be done in your wood-fired oven.

You might want to try what Dave calls “worst case scenario” which is having to cook a brisket from a cold oven. Actually, he now says it’s the “best case scenario.”

Dave lit a cold oven early on a Saturday morning then went to the store and bought the brisket. When he returned, Dave added 4-5 more sticks of wood and seasoned the meat, coated it in oil, rubbed it with salt and pepper, and laid it in a pan with herbs and vegetable trimmings. When the sticks of wood were about half burned he placed the brisket near the front of the oven and closed the door. He monitored the oven temp with a regular oven thermometer. As he opened the door to check the temperature, it allowed the fire to catch a breath of air that kept the smoke going for quite a long time. The temp started around 250. Eight hours later when he pulled the brisket out of the oven the temperature finished at 180, with lots of smoky beefy flavor and no need for BBQ sauce.

Though he owns a traditional smoker, he’s been using his wood-burning pizza oven as a smoker for years. Dave says this cold-oven start is the all around easiest and best tasting brisket experience he’s had. Two short firings to heat the oven, and then he never touched the wood again once the brisket was loaded. We both believe the cold-oven technique is even easier than the cycle down method.

We found that when you smoke at the beginning of an oven cycle, you can ramp up the heat after the meat has finished and rests. That allows you to cook anything you want to serve with your brisket.

Let the wood burn down to coals. This gives you time to dress your meat and put it in a pan. Load the meat in the oven when the temp is between 250 and 300.

Add a small piece of fuel to the coals if needed—or put on a few soaked wood chips for flavor. As the new wood catches it will smoke a little bit.

Push the coals back or to the side of the interior and put in your meat. 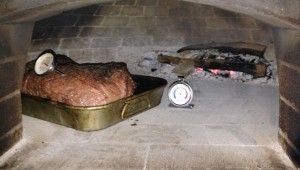 Close the oven door to choke off the oxygen and let the meat begin smoking.

For the next hour or two (depending on how smoky you want the flavor) periodically open the oven door to allow oxygen to get to the coals. Leave the door off until the coals catch again. Then put the door back on the choke out the flames. 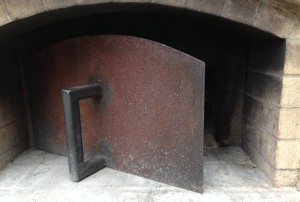 Do this once or twice an hour depending on the temperature of the oven and see how much smoke is generated. The goal here is to let in enough oxygen to resuscitate the coals, to generate a bit more smoke, and to keep the coals alive. You don’t want to fully ignite the fire again unless your oven temperature has dropped below 180. 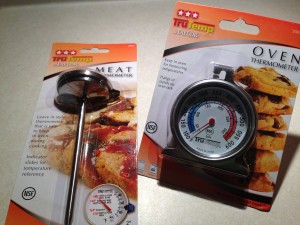 After the first hour or so, the oven will have enough retained heat to maintain a temperature over 180. Put the door on tight and let the meat continue until it has an internal temperature above the USDA minimum safety guidelines. 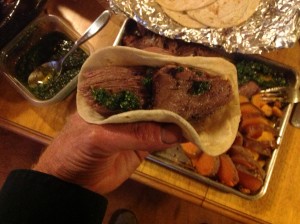